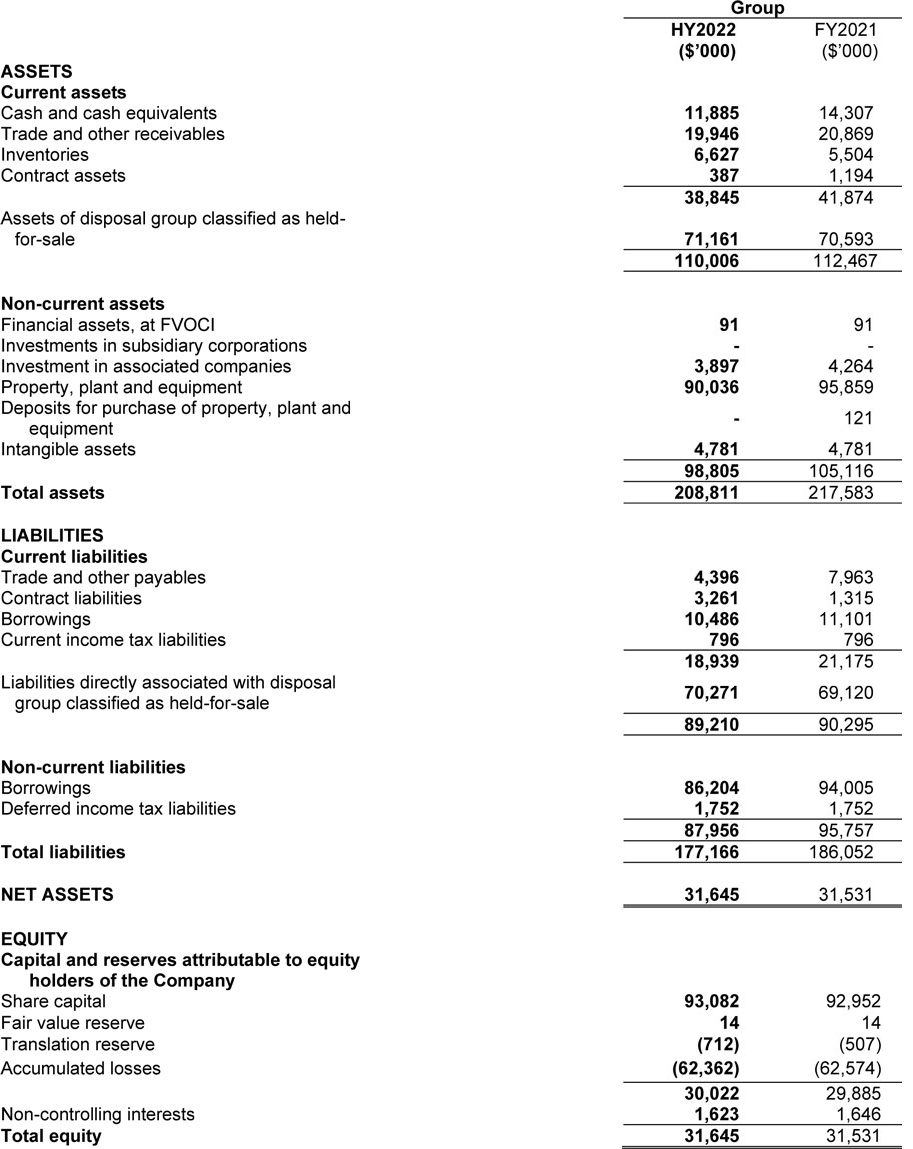 Review of Performance
Review of Statement of Comprehensive Income

The $1.23 million decline in revenue for Offshore & Engineering segment was mainly due to:

These also explained the fluctuation in Marine segment revenue in 2HY2021 as compared to 2HY2020.

Revenue from the waste treatment business decreased marginally by $0.34 million or 5% from $6.83 million in HY2021 to $6.49 million in HY2022 because of lower work orders from a major customer

Overall, the gross profit of the Group decreased by $0.82 million from $4.39 million in HY2021 to $3.57 million in HY2022. The decrease was mainly from the Energy Services segment incurring higher energy and running costs in the treatment of waste.

Detailed explanations of these gains/(losses) were highlighted in Part E, Note 5.

Finance expenses remained relatively the same for both reporting periods HY2022/HY2021 at $2.0 million.

The Group recorded a net profit from continuing operations of approximately $0.3 million for both reporting periods.

Net cash provided by investing activities of $0.53 million mainly due to the following:

Net cash used in financing activities of $8.55 million was mainly related to the net payment of bank borrowings $6.01 million, lease liabilities of $0.73 million and interest payments of $1.81 million.

Amidst the current macroeconomic factors such as rising interest & inflation rates, higher raw material, commodities and energy costs, the performance of the Group remained relatively similar as compared to last year same period, notwithstanding the cessation of government grants of $0.4 million for the current reporting period.

The Group will exercise caution while continuing to pursue organic growth as well as to grow and expand its existing core business. With the current level of high oil prices, customers enquiries for the Marine segment's MRO services are improving generally. The order book for new build propellers is healthier in the second half of 2022 with outstanding orders of approximately $7.0 million.

The performance of the Group’s Energy segment has temporarily impacted its plant activities owing to COVID-19 virus. Work commitments were re-scheduled to the month of July and August 2022 accordingly.

The segment is currently seeking new licenses to expand its waste management businesses.

The Group continues to strive for new business opportunities while controlling its operational cost to ensure resiliency in its businesses.

The Group had embarked on ESG initiatives leveraging our integrated engineering and manufacturing capabilities to explore and expand to new growth areas.

We are committed to providing timely, high-quality information to our investors. Whether you are interested in key performance