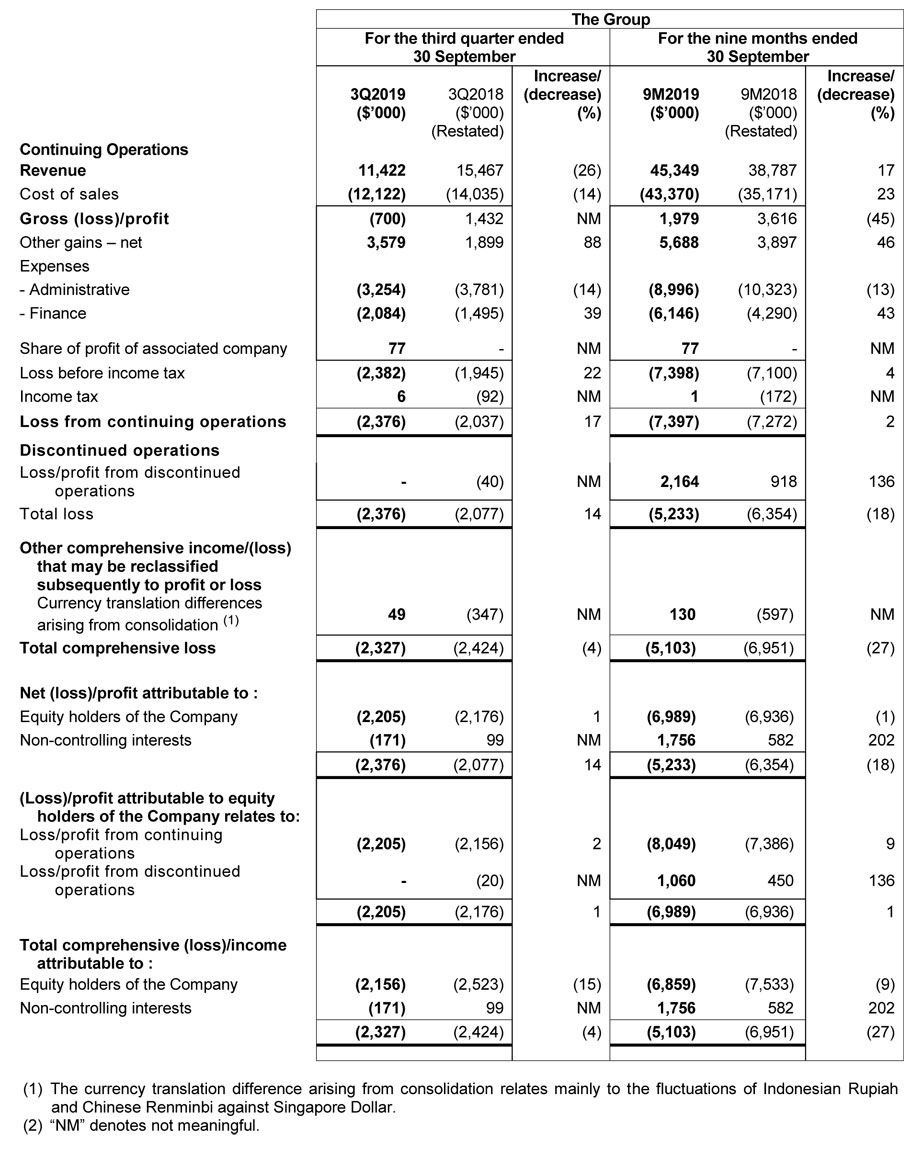 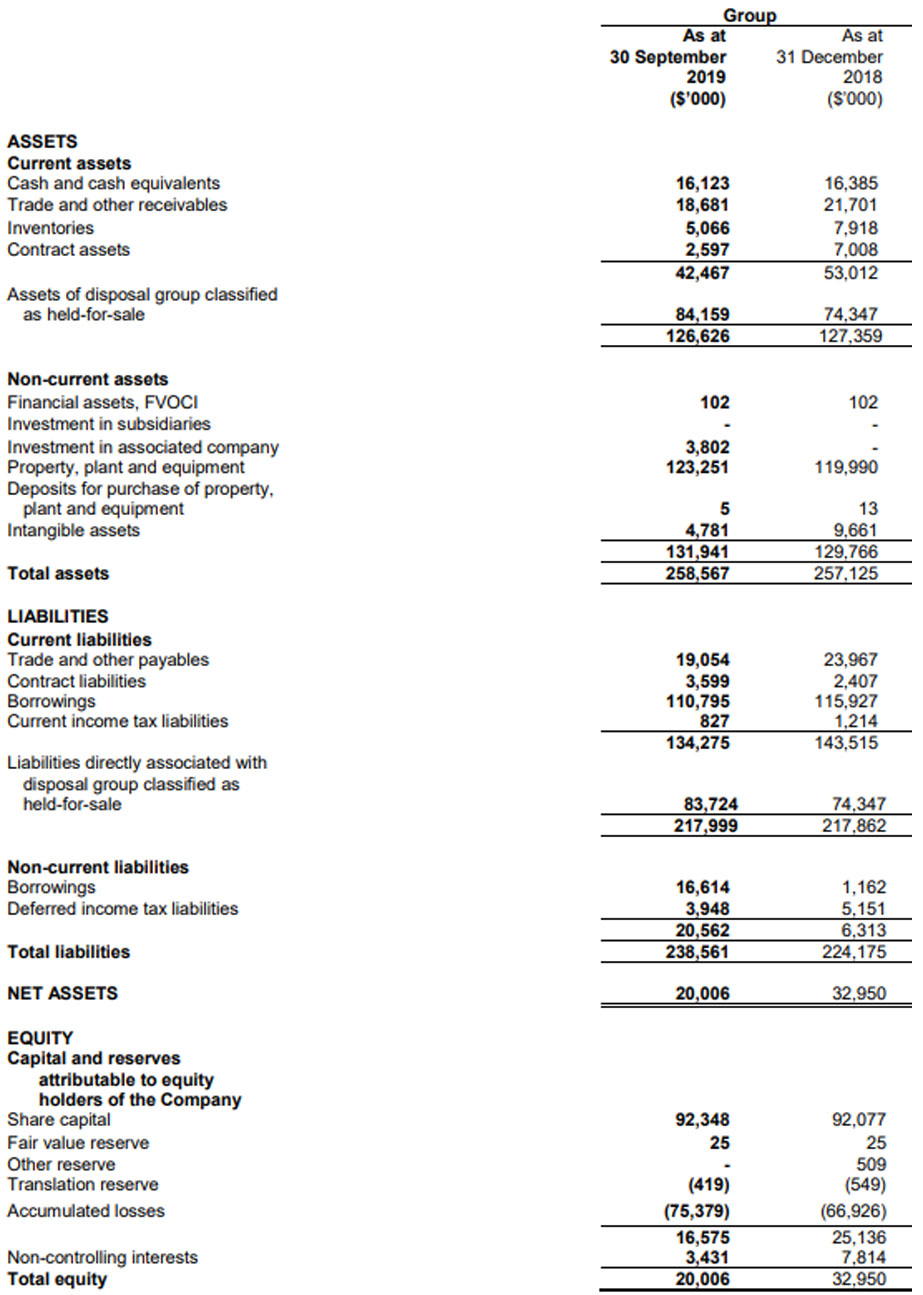 The Offshore & Engineering segment continued to be affected by slow market sentiment with revenue declined by $4.1 million or 37%, from $11.1 million in 9M2018 to $7.0 million in 9M2019. The reduction in revenue was mainly due to lower work orders in its offshore structure and fabrication of $3.1 million and precision engineering business of $1.2 million.

These also explain the lower revenue from Offshore & Engineering segment in 3Q2019 as compared to 3Q2018.

In view of the disposal of 50% equity interest in Vac-Tech, the remaining business of this segment comprise of waste treatment and recovery waste system.

These also explained the fluctuation in revenue in 3Q2019 as compared to Q2018.

Gross profit in 9M2019 decreased by $1.6 million when compared to 9M2018, due mainly to lower revenue from offshore structure and fabrication and precision engineering business as mentioned above offset with higher gross profit from Energy segment’s waste treatment services.

Consequently, the gross profit margin declined by 4.9% from 9.3% in 9M2018 to 4.4% in 9M2019 due to Offshore & Engineering segment and diving services which were not sufficient to cover its fixed running costs.

These also explained the fluctuations in cost of sales, gross profit and gross profit margin in 3Q2019 as compared to 3Q2018.

Detailed explanations of these gains/(losses) were highlighted.

The above also explained the decrease in administrative expenses in 3Q2019 as compared to 3Q2018.

Finance expenses increased by $1.9 million or 43% from $4.3 million in 9M2018 to $6.1 million in 9M2019, due mainly to the expensing of $1.2 million interest in connection to a construction loan for 42A Penjuru Road property as opposed to capitalising the said interest to property, plant and equipment in 9M2018. Additional finance cost in respect of the amortisation of lease liability of $273,000 was also included in 9M2019.

This also explained the increase in finance expenses in 3Q2019 as compared to 3Q2018.

REVIEW OF STATEMENT OF CASH FLOWS

The Group’s cash and cash equivalents as at 30 September 2019 were approximately $15.3 million. The Group reported a net cash inflow from operating activities of $11.9 million in 9M2019 due mainly to its operating income before changes in working capital of $8.4 million and decrease in inventories by $2.9 million mainly from delivery of new built propellers during the current reporting period.

Net cash provided by investing activities was $5.9 million for 9M2019 mainly arose from the:

Net cash used in financing activities of $17.8 million during 9M2019 was mainly a result of repayments of term loans, lease liabilities and payment of interests of approximately $17.5 million and dividend payment of $4.2 million, offset by proceeds from bank borrowings of $3.9 million.

As previously announced on 28 June 2019, Mencast Energy Pte. Ltd. (“Mencast Energy”) entered into a sale and purchase agreement for the disposal of 50% equity interest in Vac-Tech Engineering Pte Ltd (“Vac-Tech”). Prior to disposal, Mencast Energy holds 2.1 million shares in Vac-Tech representing 70% of its existing issued and paid-up share capital.

As at 30 June 2019, following the Group’s decision to sell Vac-Tech and in compliance with SFRS(I) 5 Non-current Assets Held for Sale and Discontinued Operations, the assets and liabilities of Vac-Tech including the goodwill arising from its consolidation were classified as Assets of disposal group classified as held-for-sale and Liabilities directly associated with disposal group classified as held-for-sale respectively on the consolidated balance sheet. Its financial results have been reclassfied to “Discontinued Operations” for the current financial period reported on and the prior period financial results have been restated to reflect this change in presentation in the Consolidated Statement of Comprehensive Income. The change in classification and presentation has no effect to the profit or loss after tax and net asset value of the Group.

On 24 September 2019, Mencast Energy had completed the disposal of its 50% equity interest in Vac-Tech.

The summarised net profit for 9M2019 and 9M2018 from Discontinued Operations are presented as follows:

The Group expects the outlook of the marine, offshore, O&G industry to remain largely unchanged. It expects market conditions to remain challenging and competitive to which pressure on margins will persist. The Group will continue to exercise prudence and place greater emphasis on operational costs savings.

Following the sale of Vac Tech, the Group is focusing on expanding the capacity of its waste treatment plants to serve its growing customer base in the Energy segment. This initiative will take time to develop and is expected to diversify our business instead of relying on the existing industry / markets that the Group is currently serving.

We are committed to providing timely, high-quality information to our investors. Whether you are interested in key performance