This printed article is located at https://investor.mencast.com.sg/financials.html 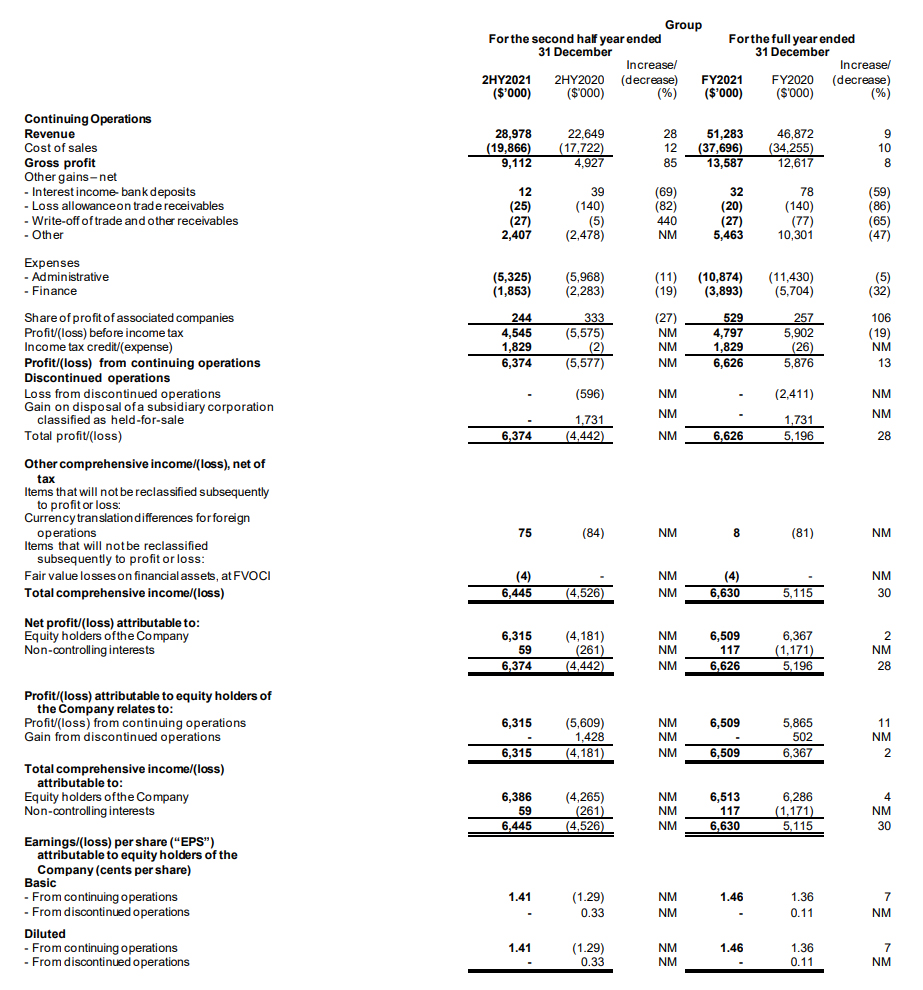 Review of Performance
Review of Statement of Comprehensive Income

These also explained the fluctuation in Marine segment revenue in 2HY2021 as compared to 2HY2020.

These also explained the fluctuation in Energy Services segment revenue in 2HY2021 as compared to 2HY2020.

Cost of sales increased by $3.44 million or 10%, mainly attributable to higher running costs in Marine segment of approximately $2.74 million which was in line with the increase in revenue.

Gross profit of the Group was up by $0.97 million or 8%, from $12.62 million in FY2020 to $13.59 million in FY2021. The increase was mainly due to the delivery of high value new built propellers in the last quarter of 2021. Higher demands for the Group's MRO business also contributed to improved gross profit. This increase was, however affected by a slight decrease in gross profit from Energy services segment due to its higher running costs.

Consequently, the Group's gross profit margin remains relatively the same at 27% for both financial years ended FY2021 and FY2020.

Gross profit for 2HY2021 increased by $4.19 million or 85%, from $4.93 million in 2HY2020 to $9.11 million in FY2021. The significant jump was mainly attributable to Marine and Offshore and Engineering segment which contributed higher gross profit of $5.58 million and $1.35 million respectively. The increase was, however offset with a decrease in Energy services segment's gross profitability of $2.75 million due to lower volume of work orders from an Oil Supermajor customer in 2HY2021 as compared to 2HY2020.

Administrative expenses in FY2021 were $10.87 million, decreased by approximately $0.56 million or 5% mainly due to lower legal and professional fees in FY2021 as compared to FY2020.

This also explained the decrease in administrative expenses in 2HY2021 as compared to 2HY2020.

The finance expenses of the Group of $3.89 million in FY2021 declined by 32% or $1.81 million from $5.70 million in FY2020, mainly due to lower interest rates charged on certain borrowings, as well as a reduction in the Group's borrowings, in line with settlement of bank borrowings arising from assets divestment and the commencement of monthly repayment of loans in the first quarter of FY2021.

These also explained the fluctuation in finance expenses in 2HY2021 as compared to 2HY2020.

These also explained the fluctuation in share of profit of associated companies in 2HY2021 as compared to 2HY2020.

The cash and cash equivalents of the Group as at 31 December 2021 were approximately $14.31 million. Overall, the cash and cash equivalents decreased by $1.27 million as shown in Part D Consolidated Statement of Cash Flows. The Group reported a net cash inflow from operating activities $18.82 million in FY2021 due mainly to its operating cash flow before working capital changes of $18.26 million and net increase on working capital of $0.53 million.

Net cash used in investing activities for FY2021 was $3.33 million mainly due to:

Net cash used in financing activities of $16.76 million during FY2021 was a result of repayments of term loans, lease liabilities and payment of interests of approximately $16.89 million, offset with proceeds from bank borrowings of $0.13 million.

The Group continues to deal with the ongoing challenges brought by the COVID -19 pandemic in the current reporting period. It remains positive over the demands from its customers in the marine, offshore, oil and gas industry, which has shown signs of recovery. Persistent and rising crude oil prices had also injected some market optimism in these sectors. It will continue to stay focused on capturing opportunities that complement or expand its engineering, fabrication & manufacturing businesses, and MRO services.

The Group continues to make good progress in executing its expansion plan in enhancing the waste treatment plant capacity under the Energy segment. It is currently working with various government agencies in respect of meeting their health, safety, environmental and regulatory requirements. This segment will intensify its efforts to grow its customer base with new customers, as well as meeting higher demands from recurring customers.

Management remains watchful for potential headwinds. With interest rates set to rise, finance charges are poised to increase. Higher operating costs from labor and systematic inflation are likely to be a defining characteristic going forward. Other issues such as geopolitical tensions, supply chain disruptions and rising electricity prices in Singapore are amongst the factors that have also been taken into consideration.

The Group remains committed to execute its turnaround strategies, to remain prudent and focus on operational cost containment to ensure resiliency across its business segments as well as to continue to drive growth by exploring viable opportunities both in Singapore and overseas, and to seek out strategic partners and potential investments.